Digital Chaos, and in an interview with TheScore published earlier today, the Canadian said he does not expect his team to be able to challenge Evil Geniuses until the second Major. Although, Aui did say he expects Digital Chaos to be the second best team in North America. "We’ll be able to compete in the Majors just not with EG maybe," he told TheScore. 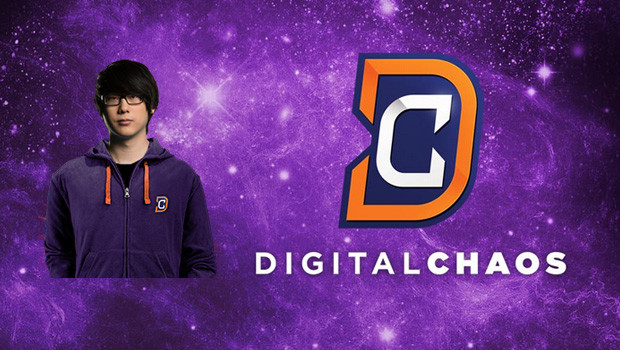 Former Evil Geniuses player AUi_2000 found a new home in Digital Chaos Digital Chaos' roster whose website was leaked accidentally last week is a blend of experience and talent from NA, and although Aui speaks with confidence about his hopes for the new team, he admitted in the interview they have yet to play together competitively. The TI5 winner also mentioned that with two players lacking experience in the team, it will be a learning process to get the team into shape.

Digital Chaos to split a % of ALL revenue with the players

However, the most interesting piece of information from the interview with TheScore is not predictions of where his team will fit in the power rankings of NA, but in fact Aui_2000's comments on the model to be used by Digital Chaos. "The reason that we picked Digital Chaos over anyone else is because they sort of have a new model for teams and players in Dota," said Aui_2000 in his interview with TheScore.

"It’s more of a revenue share model. So how old teams would work in Dota 2 is that teams would give players a salary and that’s all."According to Aui_2000, the traditional model meant that besides a fixed salary, players would not receive or be fully aware of the income the organisation would receive from sponsorships. He stated that because of this, an organisation could reap the rewards of their team's success but it would not be reflected in their salaries until it came time to renew their contracts. When nudged to give more details on sponsorship deals and how players did not necessarily beneifit from them, Aui gave the example of Evil Geniuses sponsorship with T-Mobile.

"For example on EG we had T-Mobile come in before TI and the players won’t see any of that money under that model because T-Mobile sponsors them but after EG has paid off their operational budget for the team any extra sponsors are pure profit for them and the players don’t get anything."

Kuroky raised similar concerns (Teamliquid.net) This is also something that Kuroky mentioned in the past when he was asked why he decided to play with Team Secret and not be part of an established organisation instead. The German even went so far as to call the model a "scam" in an interview at the Summit 3 with SLTV, stating he believed organisations were exploiting players. However, Digital Chaos hopes to be different.

"The biggest thing about Digital Chaos is that they are going to be pretty transparent with us," said Aui_2000. "We’ll know how much money is going in, how much money is coming out and we’ll get a percentage cut."I can’t say how much that is — of the sponsor revenue or stuff like that, and we can grow together as a team so when we do well they do well. It’s not just like we’re doing really well but it’s not reflecting in terms of our salary."You can read the entire interview on the TheScore.Reminder of the Digital Chaos Line-up: