The post TI shuffle is always emotional. We DOTA fans love our teams, so change is hard. This year, thanks to the Majors, the shuffle occurs in an even shorter timespan. In a recent Weibo post we learned that Yao has indeed decided to bow out, but not completely. The long-standing LGD Gaming player will instead now remain in the organisation as a substitute, with Fan 'rOtk' Bai joining the active roster.

During the post-TI shuffle, there are always a few moments that really pull at the heartstrings of fans. For some it's learning that rOtk is moving to LGD. For others, it was watching fellow players join xiao8 on valentines day.The most recent one is Yao 'Yao' Zhengzheng 's heartfelt message about his decision to step down from LGD Gaming as a main player. Thanks to Liquiddota user Monv18hao, we have a translation. The original post is already very popular on weibo, amassing over 1,600 comments and 3,000 forwards. 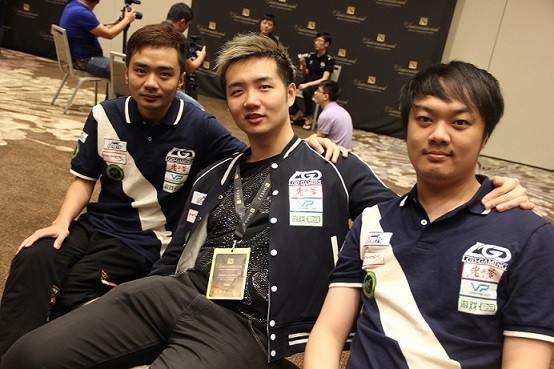 After his first discovery of DOTA, Yao quit university to play Dota and has competed for the past 8 years. Starting in September of 2010, Yao played with

For the Dream which later became LGD gaming. In August of 2011, he returned to the pro scene with LGD in The International 2012. Yao played in 807 matches with LGD, with his most played heroes being Invoker, Clockwerk, and Darkseer. After spending 1265 days with LGD it's no surprise he sees them as his family; which is why it's understandable that he is not retiring completely but only stepping into a substitute role.

"I'm not discouraged and I have not given up ... Perhaps it is fated that the dreams during youth are left with a little bit of regret. I think my youth is close to its end too. In the future I hope there is a day I become more mature and come back, since this is the dream I want to chase for a lifetime!"

For those who wish to see Yao continue to play this is fantastic news. Others, however, are more excited to see rOtk step into his role in LGD. Other rumours support the idea that

Zhang 'xiao8' Ning is also retiring. Who will make the better offlaner? rOtk or Yao? 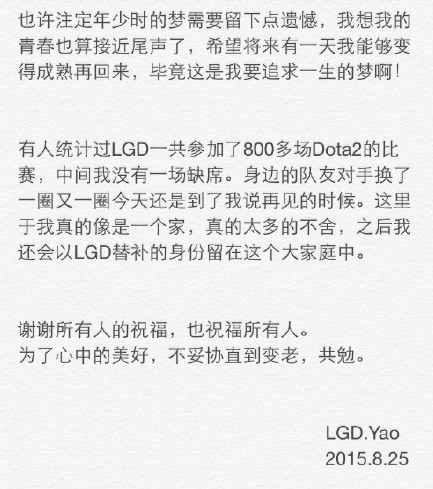 In the final sentence of his missive, Yao says:

"Thank you everyone for your wishes, and I wish the best for everyone. For the happiness in our hearts, we won't compromise until old age. Let's encourage each other."