The shuffle is approaching and due to the deadline imposed by Valve’s Majors most of the changes will happen in the coming weeks. Team Secret has not achieved the desired results during The International 5 and most likely many players will move in different directions. In various interviews, Ludwig "zai" Wåhlberg has stated that he would take a break for about 8 months to focus on his education, but after he will be back to Dota. It is also rumoured that Kuro "KuroKy" Salehi Takhasomi would like to form an all-German team while Artour "Arteezy" Babaev is confirmed leaving Secret for Evil Geniuses.

Today I’m not going to speculate about every player or if the team itself will continue to exist or not, but I will focus my attention at one position for which we have the most concrete idea who the candidates to replace a leaving player will be, the mid lane. There are rumours about three players. The current mid laner Gustav "s4" Magnusson will most likely change team and maybe will head back to Alliance. Clement "Puppey" Ivanov is rumoured to want to play with Danil "Dendi" Ishutin and if so he would move under the Secret’s banner. KuroKy always wanted Adrian "FATA" Trinks as mid since the team was created, they are friends and respect each other skills.

Today Theeban "1437" Siva said on stream that Puppey and KuroKy are probably splitting up (still nothing official from Team Secret), zai could be back from school in time for the next TI and that s4 has still not decided about his future. But I’m still going to compare the rumoured mid laners for the team that will be remade. 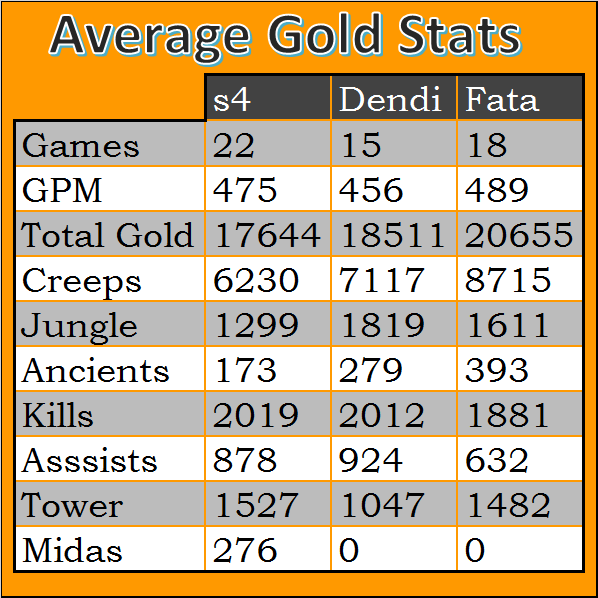 Dendi, FATA and s4 are all veteran players that share a similar play style but we can find out small differences between each other and the statistics from TI5 will help to analyse their current situation.

They aren’t players that focus on their own farm but their game is more ganking oriented. In fact Dendi has on average 456 GPM and 239 LH, s4 475 and 197, FATA 489 and 273. s4 is the player that obtained less gold on average but he is also the only one that bought a Hand of Midas, in three different games and at 17 minutes on average - quite late as the average buy time in this patch is 12.2, while during TI5 it was 15.4.

FATA obtained more gold from creeps and less from kills and assists while at the opposite s4 is the player that earned less gold from creeps, jungle and Ancients. Dendi instead is midwaybetween them, being able to farm creeps decently and still getting gold from ganks, but he seems to ignore towers compared to the others. He also exploited his jungle the most, maybe thanks to the supports’ help. s4 and Dendi gold from Assists also show that they are more active than Fata as gankers. 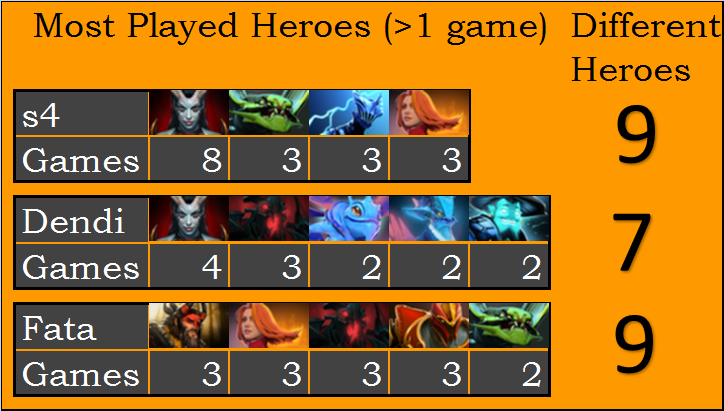 S4 and Dendi mostly choose to help their lanes with multiple ganks during the early and mid game, often ignoring their own items and farm, while Fata is more a mid game focused teamfighter that prefers to move together with the team.

The help that they receive from their supports is also an important point into their gameplay. Dendi is the player that tends to receive more help from his team and in this way he is also able to secure most of the runes. On average he has 7.7 runes per game, Fata 6.7 and s4 6.2. Between them s4 is the most sacrificial midder because most of the time he is on his own without a lot of help from the supports. Personally I rate FATA has a great mid laner in the West and surely he is the most balanced between them. He is somewhere in the middle between ganks to help others and help received for himself. By different patches the mid role mostly evolved into a second carry and FATA is able to farm more than the other two, thus translating in a real carry in mid-late.

There is another point to consider, s4 is also a drafter, and probably one of the best ones in Europe. When discussing their possible contribution to the team we also have to consider this. Without s4 the draft task will probably fall in the hands of Puppey. Now, someone could argue that during TI5 he has not done wonders with this job, but we don’t know how Secret’s drafting process worked at TI5 and if there were changes that caused them to stagnate. We all know that personal skills have almost 0 value if the team’s members don’t trust each other and maybe he wasn’t able to draft completely “free” and was subjected to pressures.

Considering everything is really hard to tell who would be the best pick for the team, especially because we don’t know the other team members as of now.Credits: stats from datdota.com