I5 is also where Valve showed some much-needed personality, spotlighting the people and players that make this tournament a great place to be, not just to watch.

IGN attended The International 5 at Seattle's Key Arena -- and these are the moments we’ll remember most.

The explosive, game-winning play that earned Evil Geniuses first place at The International 5 sent the Key Arena audience into a frenzy. With Sumail down, EG was on the back foot, giving CDEC -- the unstoppable underdog of the event -- room to mount a comeback. But a Ice Blast from ppd’s Ancient Apparition set the stage for a devastating Echo Slam from Universe’s Earthshaker. It secured four kills. This was the catalyst for EG’s $6.6 million victory.

The Unexpected Social Effect of Emoticharms

In a huge arena filled with thousands of people all cheering for different teams, the one thing that united many of us were silly pins. Each of the six random emoticharm packs included a set of three pins featuring the Dota 2 Hero emoticons and a corresponding sticker. Though it seemed a little gimmicky at first, completing the emoticharm sticker sheet promised a special courier and in-game golden emoticons, so there was an incentive to play the International exclusive collection game. 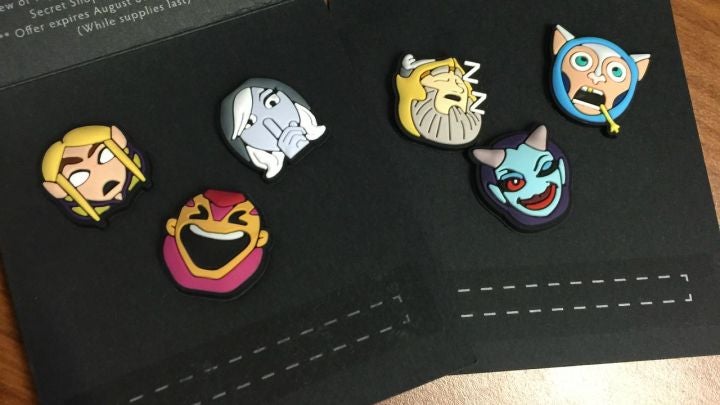 Each attendee was given one free pack, and additional packs were given for every $50 spent at the shop. With a high chance of getting doubles of sets, it took a lot of trading and teamwork to fill out the emoticharm sticker sheets.

We ended up talking with many of the people around us to work together and fill out as many sticker sheets as possible. Teamwork!

During the big All-Star match, which typically includes 10 professional players from a variety of teams, we were treated to a new game mode from Valve: 10v10.

With only 10 pros on stage, the other 10 players were selected from the audience. For the first time ever, 20 players battled on a map usually reserved for 10. The results were amazing and ridiculous. Heroes clashed in giant battles, flung spells with reckless abandon, and died unheroic deaths.

The 10v10 mode probably won’t be used for any serious competitions, but it looks like an excellent way to cool off between the standard but intense matches of Dota.

Oh, and one of the players from the audience gave us quite a surprise.

The TI5 All-Star Match already promised to be great when the team captains (n0tail and Chuan) started picking teammates for their 10 vs. 10 match from the audience. One lucky fan, chosen at the suggestion of host Kaci Aitchison, took to the main stage in a hilarious, sloppy Pudge outfit.

Aitchison and Team Secret’s Puppey then revealed the cosplayer to be Dendi -- the lovable Na’vi player who wasn’t selected to play in the All-Star game. Sweaty and committed to his role as the grotesque Pudge, Dendi’s unmasking earned the crowd’s most deafening roar of the week.