Team Empire came out the victors of a crucial tie-breaker in group A on Thursday, defeating VP to earn their spot in the winner's bracket. During press day the team was in high spirits, unable to contain their delight at their performance the day before. We spoke to Empire's team captain ua Roman 'Resolut1on' Fominok about the groupstage, Techies, the TI meta and his own meme. 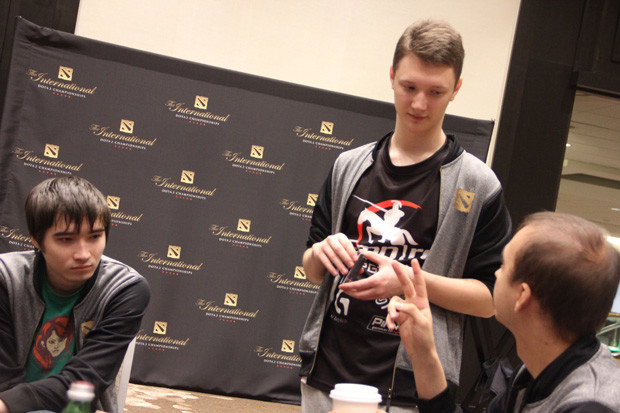 MalystryxGDS: So resolution the groupstage is over and you beat VP in the tie-breaker, does that mean you’re the best Russian/CIS team?

Empire.Resolut1on: (laughs), I don’t know, maybe yesterday we were the best team but sometimes they beat us, sometimes we beat them.

MalystryxGDS: Is it a shame that the tie-breaker had to be with a Russian team?

Empire.Resolut1on:Of course I feel sad because they are our friends but this is a game and we could not decide who we would play.

MalystryxGDS: 3 points if you win, 1 point if you draw, 0 if you lose, what are your thoughts? What about the bo1 lower-bracket?

Empire.Resolut1on:The group stage point system is a fair system for me. If you are the best you just need to beat a few teams 2-0 because 1-1 is not good enough. If you are the best, you should beat all teams. It is the International system, someone will always feel it is not fair.

Also I think next round some teams have bo1 and it is so hard for each team. You can push someone with a strategy they don’t know. I think it is not fair to play a bo1 game.