Right after the drama with f0rsaken, here we have another «potential» cheating situation again. Now under suspicions is CIS-team Syman; more specifically one player – Artyom «iDISBALANCE» Egorov.

Just passed the European qualifiers for Dreamhack Winter, which was attended by the 175th team in HLTV ranking, Syman Gaming.

Syman was able to reach the final of the qualifying tournament, defeating Vitality (#41), ex-Space Soldiers (#20) and AGO (#29) on its way.

Xantares immediately tweeted and attached a link to an allegedly banned FACEIT profile of iDISBALANCE:

EVERYGUY BANNED FOR CHEATING AND STILL PLAYING QUALIFIER HOW IS POSSIBLE? =D I THINK ESEA DRUNK https://t.co/9zQbq7BjQ5 so funny

Artyom’s teammate claims that the account does not belong to him:

If you go by the link, you can find banned account of  -DISBALANCE with the Bosnian flag.

The Polish organization AGO also filed an official protest on the result of the match:

In our view, the match against @symangg (@t0rickgo, Sanji, Nealan, @iDisbalance, perfecto) wasn’t entirely sportsmanlike. We’ve lost it on the server, but we have a suspicion that our rival was using aim assistance software. We’re currently waiting for the @ESEA admins’ decision.

1. In the current roster, the team played the first official match 16 days ago, after which Syman immediately jumped to the qualifier for Dreamhack Winter. The guys had only two weeks and in their first serious matches, they showed a high level of play. 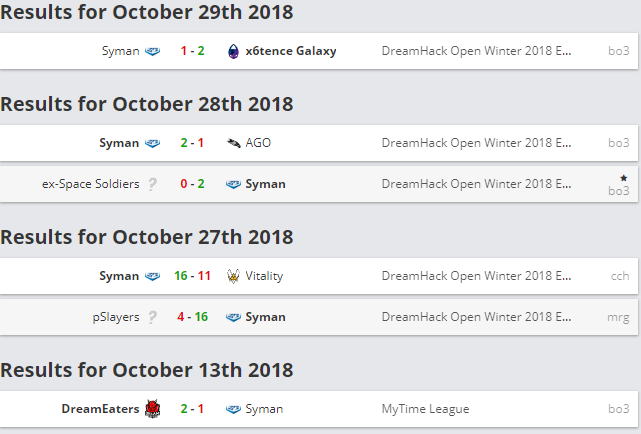 2. Be that as it may, a FaceIt account is indirectly linked to iDISBALANCE.

3. Below are a few suspicious moments from the matches of Syman Gaming.

It is important to understand that in each clip there is nothing strange; the first three episodes are typical wallbangs/shots, and sometimes even tougher things happen with spray. The issue is that there were a lot of such tough moments by iDISBALANCE in the qualifier matches. In addition, if we discuss the results of the matches, the team played extremely well despite only recently being formed.

4. In the same day Syman overran AGO and Space Soldiers, yet after dominating these teams, suddenly lost to x6tence Galaxy – a much weaker team in comparison to the Poles and the Turks. At the same time, on the third map Syman led 12:7, but eventually lost 13:16. There are two possible options – choose the one that suits your level of skepticism.

«Of course, awful. Firstly, we were affected by fatigue. I woke up at midday and since that I had, been playing hard games until 2 AM... For me, I failed inferno mostly due to fatigue, I was exhausted. No problem, 2nd of November we are going to play the Minor qualifiers, I think you’ll see us there», = says iDISBALANCE.

What is in the defense of iDISBALANCE?

Our team and coach is now on a bootcamp, except t0rick. We are confident in the integrity of our players and open to an independent inquiry. When all suspicions disappear, we expect apologies from @XANTAREScsgo.

Syman is a Kazakhstan organization, and the bootcamp of team is located in Belarus. If we take a look on photos on official VK iDISBALANCE page, we can assume that he is really on the bootcamp: 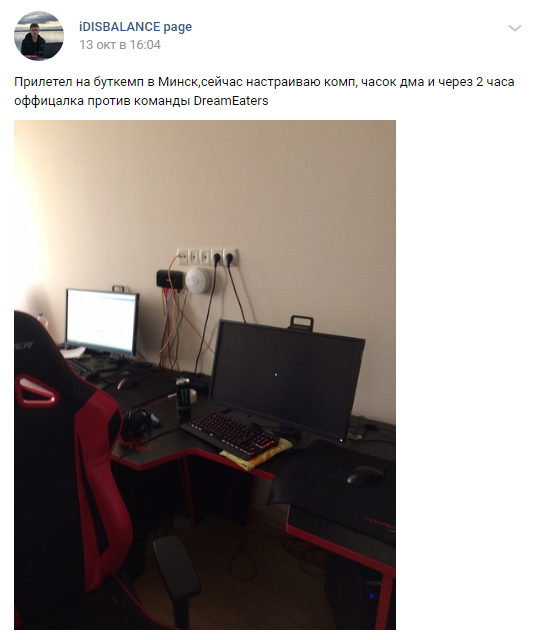 «Just arrived at the bootcamp in Minsk, setting up my PC, one hour of DM and then in about 2 hours official game versus DreamEaters». 13th of October 16:04 MSK. 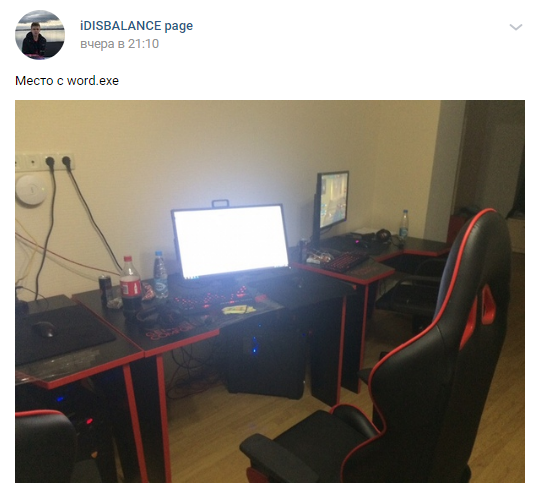 2. Alexey «OverDrive» Birukov (Russian ex-professional player) is sure that iDISBALANCE is clear: «Such shots through walls and smokes can’t really be recognized as cheats. The advantage of cheats is not in shooting through walls, but in reading the opponent. 1-2 kills per map through smoke or texture will not give you any advantage, but timing transition for the coming bomb carrier – this might matter. In these moments we can see lucky shots, which is typical for famous players, as well this is the usual situation for FaceIt. I know iDISBALANCE for more than a year, he prefers to play in teams with friends and stands out among them. Syman is his first serious team».

3. Arseniy «ceh9» Trynozhenko is of the same opinion: «I know Artyom personally and saw how he plays. I have no doubt that he is clear. He is quiet, calm, discreet. I’m glad I chose him to join my ROG team. Therefore we will go to Sweden in a couple of months for the win. And about the evidence that comes out, well, they are funny. Is there some kind of account in friends and just a few tough moments? My apologies, if you want to win such teams as Space Soldiers, Vitality and be one match away from Dreamhack you have to play tough. Not only Artyom played so decently, but the whole team also tried very hard. It’s very easy now to blame someone for cheating, but this is the question to developers of CS:GO». 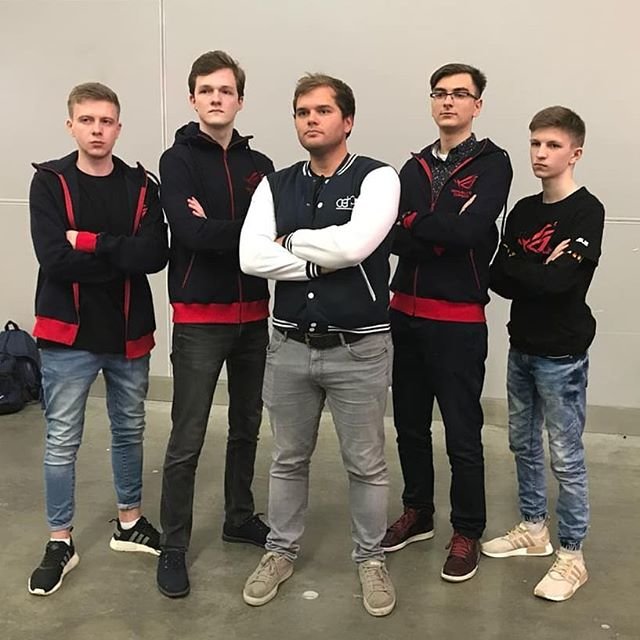 iDISBALANCE (leftmost) will attend the ROG LAN-tournament in Sweden as part of the team of ceh9.

4. Moments for which there are no complaints: an abundance of wallbangs for Artyom is not an uncommon situation:

Nice pistol round by iDISBALANCE:

Artyom «iDISBALANCE» Egorov: «If we talk about the banned account, it doesn’t concern me at all. This account was created by a man, that created the same profile as mine and after this got a ban. It was in times when i played in the team На MaSSe with streamers and so a lot of people watched our streams. Any of haters could do it. The fact this account is in my friend list i can explain that i add everyone on FaceIt: at the moment i have about 1700 friends. Also, it’s already known that both of accounts (my real and the fake one) were playing on FaceIt in the same time. How could i play on two PCs and two accounts simultaneously?

If we talk about the clipped moments – it’s really funny. People create the clips of particular moments (like wallbang on Train – i make this shot every round and only once i hit the target) and the community thinks that I’m a cheater. There were a couple of lucky shots, that referenced by everyone, but it’s just a luck and typical wallbangs (like this one). Other «strange» moments it’s a fault of 32-tick demo, that can’t show the real 128-tick gameplay that i had on my monitor. Also, it’s about my playstyle – i almost always use flickshots with AWP».

We can’t say that iDISBALANCE is a cheater – it would be lie. But his honesty will be confirmed only by time and his plays in LAN-tournaments.

In controversial situations comes FaceIt. If you remember the situation with D0cC: FaceIt decided to investigate personally:

We are at the moment in Alphen, Netherlands with @D0cC_csgo while he is playing FPL.

PC/Monitor and hardware (identical to his) has been provided by us and he is supervised by us throughout the day.

What do you think about the situation with iDISBALANCE?

Bull’s eye: how to turn a mistake into a won round?

An analysis on Faze win over Natus Vincere

What do you think about the situation with iDISBALANCE?
47 голосов
He is cheater
60%
He is clear
40%
Поделитесь с миром своим ответом